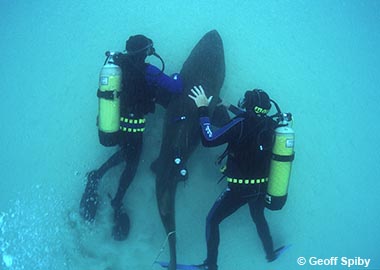 Cape Town fishermen have been catching unprotected sharks for their livers, which are being sold to some white shark cage-diving companies in Gansbaai for use as chum. The strong odour of shark liver oil attracts great whites to the tourist boats, but the practice of killing one species of shark to attract another has been condemned by shark conservationists as well as veterans in the cage-diving industry. A photograph of a number of sevengill cowsharks caught by fishermen off Cape Point on Monday has been published on the Dive Site blog. About 1.5 tons of sharks were believed to have been caught and sold to a popular dive site frequented by eco-tourists from around the world. The post said: “The bodies get exported to Australia and the livers (believe it or not) purchased by a couple of cage-diving companies in Gansbaai to attract white sharks… all in the name of shark conservation.”

Wilfred Chivell, of Kleinbaai shark-diving company Marine Dynamics, said that when he bought his boat in 2005 he vowed never to use shark products. The aim of cage-diving was to educate people and introduce them to the sharks as curious predators and animals in need of conservation, so he didn’t feel it was right to kill one species of shark to attract another. “It’s not illegal to use shark livers, but even if people are not breaking the law, they are breaking a code of honour.” Chivell said some operators were more concerned with making money. “You can see people using shark livers because they do better, but I’ve told my staff to rather be patient.” He uses tuna heads, usually a waste product, and a bit of sardine oil.

Lesley Rochat, founder of the AfriOceans Conservation Alliance, said sharks like the sevengill cowsharks were very popular with eco-tourists. “There are very few places in the world you can see sharks like this – we don’t even have to bait them – you just get in the water and they come to you.”
Rochat has just returned from America and Britain where she has been promoting diving with sharks, especially in Cape Town. “We’ve always known these sharks were being targeted, but it is a big concern that in one day they can wipe out so many.”

Rochat said the cowsharks were just one example of shark species that needed protection. Recreational fishermen are allowed to catch 10 cowsharks a person a day and the species are also caught by the Demersal Shark Sector, using longlines. According to the Department of Agriculture, Forestries and Fisheries, the species was more a by-catch than a target for commercial fishers and was worth less than R5 a kilogram. It said there was not much information on the current stock status,but there were efforts to validate its growth and biological parameters. The department said cowsharks moved extremely fast and could hunt highly mobile prey such as the Cape fur seal, which constitutes up to 60 percent of its diet.
Carol Moses, department spokeswoman, said no long-lining was allowed in False Bay.

Rochat said that although more than 200 different species of sharks were found in South African waters, only white sharks, whale sharks and basking sharks were fully protected. All other species may be legally caught and killed, although some had limited protection within Marine Protected Areas. “This limited protection of so few species is of little help, since these animals know no boundaries and therefore remain vulnerable outside those areas.”

Rochat said that Horst Kleinschmidt, former head of Marine and Coastal Management and now an AfriOceans board member; Shaheen Moola, a former chief director at MCM and now of environmental management advisory firm Feike; as well as two pro bono lawyers, were lobbying the government to improve the law for better management of sharks.
helen.bamford@inl.co.za – Weekend Argus