With the help of Saatchi & Saatchi, Cape Town, we wanted to create an awareness campaign that would educate and create awareness about the general plight of our oceans. Oceans Speak Out literally gives the oceans a voice and is made up of three powerful elements, which were strategically placed on a public beach early each morning over three days.

The first element was speaking shells, each fitted with a mini speaker device. Lifting the shell to one’s ear, the listener experienced the voice of the ocean making a direct plea for help. The second element was bottles with messages beautifully hand written by various creatures of the oceans, their pleas for help against our destructive ways. The last element was the most unusual one of the three, the coffin ‘washed up’ on the beach. The coffin placed before sunrise set a sombre scene and a plaque on the coffin said it all. ‘Every minute 208 dolphins die in fishing nets. Be part of the solution.’

The coffin created a big stir, many people were concerned that a coffin had ‘washed up’ on the beach and gathered around curiously. Reaching the public in compelling ways is our objective. 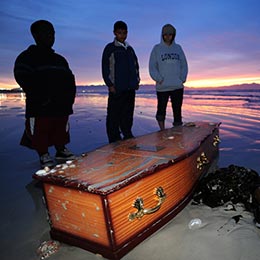